The Elmar 4.0/9cm was presented at the end of 1931 in a standardized mount version without rangefinder coupling. In the spring of 1932, the version with a rangefinder coupling followed.
The originally very massive version, therefore also among collectors the name "Fat" Elmar, was replaced from 1933 by a more modern slim design. This version remained with production changes until 1963! In the 33 years where the Elmar 9cm was built, it developed into a favorite of many photographers.

A "Fat" Elmar from the year 1932/33 is offered. It should be a lens from the last series with the early massively executed focusing mount.
The glass elements has been coated at the factory over the years and apart from this the lens is in the original condition. 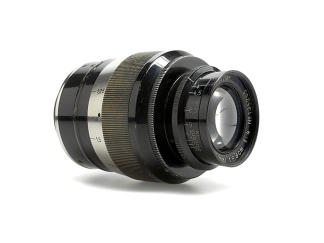