The Leica IIIf was introduced in 1950 by Leitz/Leica and was a further development of the Leica IIIc. The shutter mechanism design of the Leica IIIf is based on a modification of the ball-bearing constrution built during the war and was extremely reliable and robust. The self-timer built into the camera from 1954 on is a further development of the first version, which was introduced for the first time in the Leica IIId. In addition, the Leica IIIf also offered the possibility to use the mechanical Leicavit rapid winder.
Overall, it can be said that the Leica IIIf combined the best features of all available Leica models at the time of your market launch in 1950, and with the available flash synchronization also has an important new function.
During the construction period from 1950 to 1957 three different basic types of the Leica IIIf were produced. The first version had a black dial for flash synchronization, a classic range of shutter speeds and no built-in self-timer.
The second version had a red dial and a new shutter speed scale. These models were available from 1952 and had, in addition to the new graduation of the shutter speeds, a new shutter speed mechanism.
The third version was based on the Leica IIIf with newly designed shutter and brought with it a built-in self-timer. This version was built from 1954 until the production end.

Offered is a Leica IIIf of the first version from the year 1951-52. The technical and cosmetic condition is very good to good.
Only the long shutter speeds would have to be adjusted again.

Equipped with an Elmar 3,5 / 5cm with a red scale from the year 1952 and matching lens hood, it is a historic correct combination which is fully working and therefore both as a collector piece and as a user camera is to be seen. 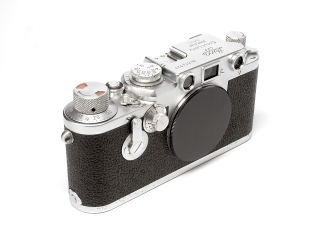