Collector's Item of the Day

Collector`s Item of the Day

Leica M post camera from 1960 with Summaron 3.5/35mm.
The camera is in clearly used condition and the shutter cloths are worn.
Nevertheless, you should not miss this very early post camera, because its clearly used condition is evidence of a busy camera life.
It is one of the first M models for the Deutsche Post, whereby the serial number is still assigned to the Leica Ig model.

The so-called Postkameras are heavily modified Leica cameras that have been perfectly adapted to their intended use.
As a result, these cameras cannot be used for “normal” photography, which could be one of the reasons why the Postkameras are not as widely collected as other Leica models.

In general, the Postkameras, with their sometimes extremely small numbers of approx. 90 to a maximum of 324 pieces, would have incredible collector potential from the point of view of rarity.
Publications on these highly specialised cameras are also rather sparse and this also leads to the fact that the Post cameras are still somewhat “undiscovered” among collectors.

The literature on Leica Postkameras refers to the MD and MDa models, usually.
According to our research, this is not entirely correct and is also consistent with a report in VIDOM magazine (No. 40) from 1988.
The first Leica Postkameras delivered were technically based on the Leica M3 and only Postkameras from 1967 onwards were modified Leica MDa models.

A basic distinction is made between the following designs: There a versions for film format 24x36mm and for 24x27mm, some were equiped with a 28mm lens instead of the usaually fitted 35mm lens and some cameras can release the shutter only by using a cable release.
Some cameras do not have a fixed aperture and/or shutter speed and can be freely adjusted. 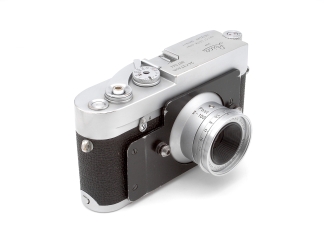