Early Leitz Leica M4-P (1980) from the first batch (it is the 560th Leica M4-P which was produced) in good to very good cosmetic condition.
The camera was serviced in October 2022 and is therefore technically in mint condition.

The Leica M4-P was introduced in 1980 and was the predecessor of the Leica M6. Due to the fact that the Leica M4-P was in production until 1987 it was manufactured paralell to the Leica M6 from 1984 on.
It is the first model which has six brightline frames integrated in the viewfinder system and therefore could be consired beeing the base for the current viewfinder system of the Leica M- series.
As with the previous model, which was the Leica M4-2, light metering on the M4-P can be done by attaching a seperate light meter, the Leicameter MR-4, to the camera and also both cameras can be used with an attachable Motor Winder for automatic film transport and shutter winding.

The Leica M4-P was finished in black chrome version, mostly. But there are also models made in silver chrome, either as regular production model or as commemorative model. 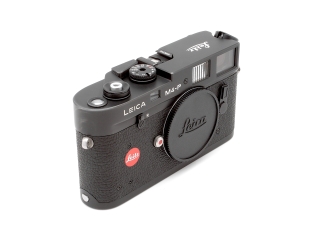