In the end of the 1990s it was really hip and cool amongst japanese teenagers to shoot pictures with the classic Leica srew mount models. For that reason Leica made a available two of the then current M-series…

In the end of the 1990s it was really hip and cool amongst japanese teenagers to shoot pictures with the classic Leica srew mount models. For that reason Leica made a available two of the then current M-series lenses in a special screw mount version. Even if the prices for Leica lenses has been lower in that decade the two offerings were mostly unaffordable for the young japanese photo enthusiast. But that does not affect the sales because of the high limitation the japanese collector's stepped into the scene. So it could be assumed that most of these beautiful build lenses has never seen service as photographic tool and were regarded instead as showpieces of engineering mastership. Most of the produced lenses are still in new or mint condition these days.
Just a few of these limited edition lenses were sold outside of japan and the one offered here belomgs to this rare species.

The Leica Summilux 1,4/50mm was released in 1999 together with the Summilcron 2,0/50mm and the Summicron 2,0/35mm ASPH. equipped with the classic Leica screw mount as limited edition model and was designated for sale on the japanese market only. All three lenses were based technically and in terms of optical design on their Leica M series counterparts with the difference, that these limited edition lenses could only be focused down to 1 meter. The closest distance for screw-mount-Leicas.
The lenses were delivered including an adaptor from Leica screw- to Leica M-mount. Specially made for the 35mm lens there was a 35mm viewfinder with black plastic body. It has been the most expensive viewfinder in the product line of that time and was not comparable to the classic Leitz 35mm viewfinder in metal housing.

The Summilux-M39 1,4/50mm offered here is in mint condition and comes including original packing!

Total production: most likely only 300 units! 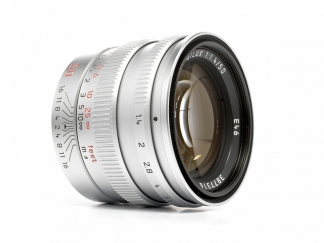