The Elmarit-M 2.8/21mm, introduced in 1980, was Leica's first in-house development of a 21mm lens for the M-System. The lens was available until 1997 and the successor version was…

The Elmarit-M 2.8/21mm, introduced in 1980, was Leica's first in-house development of a 21mm lens for the M-System. The lens was available until 1997 and the successor version was equipped with aspherical lenses.
The main area of ​​application of the lens, besides architecture and landscape photography, is industrial and reportage photography.
The optical performance is good to very good, with the lens vignetting visibly in the outer zones. However, the effect is only relevant for the image if there is homogeneous brightness in the entire image field or image structure.

During the production period from 1979 to 1995 there were only minimal differences in the Elmarit-M 21mm. The first batch from 1979 is built with the outwardly curved focusing lever (the so-called "tiger claw" style), which can also be found in other lenses. This handle was changed to the normal version after only approx. 1,000 copies. Furthermore, there is a close-up distance of 40cm with the early lenses (not rangefinder coupled!), which was also possible with the predecessor, the Super-Angulon-M 21mm.
Further detailed changes concern the execution of the engravings and slight differences in the coating layers used.

Offered is one of the extremely rare early Leitz Elmarit-M 2.8/21mm "tiger claw" from the first series from 1979. It is one of the lenses with a close focus limit of 40cm.
The lens is in unchanged original condition, is rated mint condition and is delivered including original packaging with matching numbers!

Rarity: R8 for the 1st series 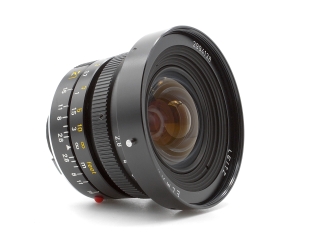