VAT can not be stated separately due to differential taxation. incl. Shipping

The Summarex 1,5/85mm lens was first produced in 1943 and official available since 1949. During the lifespan of the lens until 1954 there have been several modifications. The most important differences are the finish which was black enamel at early models and which was changed to silver chrome for the normal series production beginning in 1949.
Further varieties are found in the engraving style of the aperture index and the design of the lower lens barrel.

The Summarex 1,5/85mm offered is from 1954 and belongs to the sixth version of this lens type. This last version was sold from 1958 onwards.
The lens will be delivered including lens hood.

The lens is in cosmetical, as well as technical, in very good to mint condition.

The Summarex 1,5/85mm lens is not only a beautiful collector’s item is is also a magnificent photographic tool with a charm of it’s own. 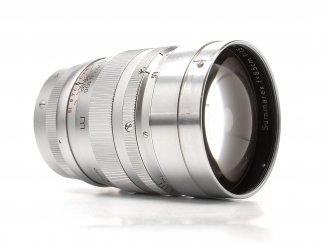