Offered here is a Summicron-M 2.0/35mm M3 from the year 1965, in technically and cosmetically very good to mint condition.
The coatings are apparently flawless, and the lens seems to be in unaltered original condition.

The first Summicron-M 2.0/35mm was produced from 1958 to 1964, both with screw mount as well as with Leica M bayonet mount. The optical design was identical for both mounts and the version with M bayonet was produced as late as mid 1969 before it was replaced by a subsequent version with a simplified optical design.
This special version, designed with permanently attached viewfinder on the lens for use with the Leica M3, appeared in the Leitz sales lists until 1974.

The first high aperture wide angle lens for Leica's rangefinder cameras, the Summicron-M 2.0/35mm made possible the use of color films of the time with their lower light sensitivity, in a wider range of shooting situations. The quality of images made on these films was absolutely comparable to images made with the bench-mark lens of the day, the Summicron-M 2.0/50mm. Consequently, photojournalists of the time began to turn increasingly to the use of this wide angle lens.

We will never be able to say with complete certainty how the Summicron-M 2.0/35mm attained its legendary reputation. The production of only 577 units with screw mount and its popularity with collectors was surely an important factor. Today however, the "normal" bayonet version also enjoys a high demand from photographers and collectors alike. A classic example of Leica optical design! 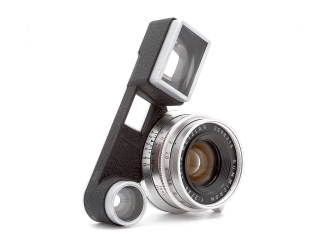