The Summicron-M 2,0/90mm lens was introduced in 1957 and was build until 1979 without ny changes in the optical formula.
During the lifespan of the lens there have been many changes on the…

The Summicron-M 2,0/90mm lens was introduced in 1957 and was build until 1979 without ny changes in the optical formula.
During the lifespan of the lens there have been many changes on the lens barrel. The first version was delivered with a removable lens hood and the superseding version has a build in lens hood.
There are lenses within this second version which were build on screw mount chassis with a factory fitted screw to M mount adapter like it have been with the first version of the lens.
The lens offered belongs to the ones with factory fitted adapter and will be delivered including the removable adapter ring.

Amongst the many detail changes on the lens barrel of the Summicron-M 2,0/90mm are the engraving style of the aperture value und the index for it, the knurling on the aperture and the focusing ring, there are versions with a knurled base and others without, with two rings on the foot of the lens barrel and later models with an even foot and of course the finish which could be either silver satin chrome or black chrome. The earliest black versions of the Summicron-M 2,0/90mm have a mix of black enamel and black chrome parts.

The Summicron-M 2,0/90mm offered here is from 1960 and one of the first totally black chromed lenses. Cosmetical condition shows slight to distinct signs of use on the early lens barrel. What is special about this lens is the silver chrome ring on the base in combnation with a black one. Normally both rings are black.
Technical condition is very good indeed and the lens is in good condition according to age. 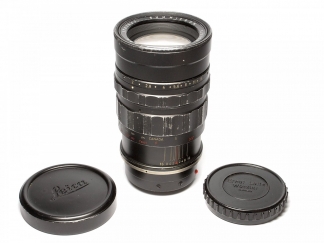