Introduced in 1963, Super Angulon-M 3.4/21mm was the second extreme wide-angle for the Leica M-series. It replaced the Super-Angulon 4.0/21mm available from 1958-1963 and, like its predecessor, also comes from Schneider-Kreuznach.<br…

Introduced in 1963, Super Angulon-M 3.4/21mm was the second extreme wide-angle for the Leica M-series. It replaced the Super-Angulon 4.0/21mm available from 1958-1963 and, like its predecessor, also comes from Schneider-Kreuznach.
With only a small change in size, the new version increased the initial opening by a half aperture and also achieved a slightly increased imaging performance. Common to both lenses is a visible vignetting at the open aperture, which was and is used by some photographers to enhance the image effect. From today's point of view, the imaging performance is good, with modern wide-angle lenses can achieve a higher imaging performance.
The main applications of the Super Angulon are architecture, advertising and landscape photography.

During the production period, there was a modification to the lens barrel/mount, which made it possible to use the Super-Angulon 3,4/21mm also on the Leica M5.
This 2nd version was manufactured starting with serial number 2473251.

It is important to keep in mind that the Super Angulon-M 3,4/21mm (as well as its predecessor) can not be used on a digital Leica M camera bodies. The rear element of the lens protrudes so far, that damage to the shutter blades could occur in extreme cases.

The offered Super-Angulon-M 3,4/21mm (build in 1964) is in very good to mint condition and will be delivered including lens hood. 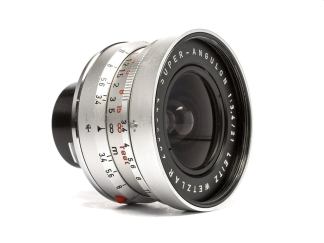