At first sight, the Hektor 4.5 / 13.5cm lens is not a collector's item in the classical meaning. The production volume is quite large, the production period long (1933-1960) and there are only few exceptional variants.
These…

At first sight, the Hektor 4.5 / 13.5cm lens is not a collector's item in the classical meaning. The production volume is quite large, the production period long (1933-1960) and there are only few exceptional variants.
These include certainly the lenses with military engravings from the time of the Second World War and also the gray painted, military-used version from the same time.

Otherwise, the detail changes are small. There are variants in the engraving of the aperture scale, the kind as the engravings are designed, the filter thread and late versions starting from 1949 have a vulcanite cover at the lower part of the lens mount.
Initially produced with a black lacquered lens barrel and a silver chromed focus scale (nickel-plated in the first 700 pieces), the Hektor 4.5/13.5cm lens was build from 1950 with a complete silver chromed lens barrel.
Since the Hektor 13,5cm lens is at first sight just such a common lens, is often worth looking at the detail.

From 1947 a lighter version of the "HEFAR" with an aluminum frame with a vulcanite cover on the lower part of the frame was developed; from 1949 with Sharkskin.
James Lager writes much more about this in the latest VIDOM – issue number 120 from December 2020.
You will receive the VIDOM magazine as a member of LEICA HISTORICA Germany. Here you can find the membership application – annual fee just 50 euros. A real bargain.

Back to the topic – The "light" Hektor offered here is exactly that rare Sharkskin version in an excellent condition. Only inside the optics has a piece of the paint come off.
With not only a painted front cover, but also the very rare plug-in rear cover made of plastic!

Total production: estimated 4.000 of the HEFAR-verison only 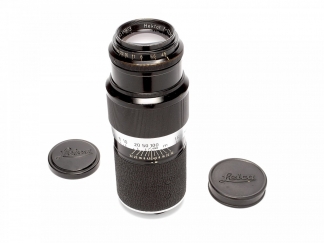